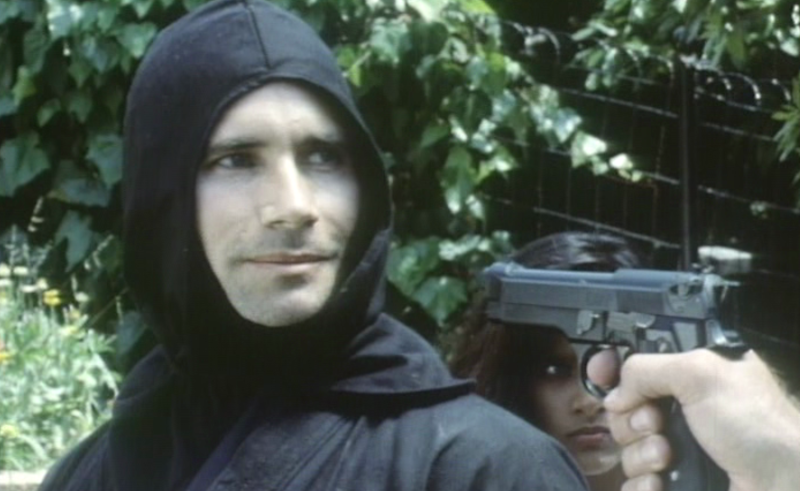 The first act is absolutely critical to films. It’s an opportunity for the director to set the plot and tell the audience who characters are and why they’re important. More specifically, for the martial-arts film, it’s a limited window in which to grab your audience’s attention through physical spectacle and to define the film’s stylistic approach to action. Failure to do these things effectively within the first 25 to 30 minutes is a huge misstep from which a film rarely recovers. Despite its weird charms, the 1991 Stefan Rudnicki film LETHAL NINJA (aka FOR HIRE) is a 90-minute roundhouse misstep to the balls.

Our film opens with a group of extras shuffling awkwardly to live golden-era rap music in a dance club. A dangerous gang of three people make their entrance and start pointing at various dancers in the crowd. As they start beating up random people for no reason, the featured rappers continue to pop and lock, as if stuff like this happens every night. The other members of this same dangerous Chinatown gang run every play in the criminal handbook: they snatch purses, burglarize apartments, steal cars, deal drugs, pimp out prostitutes, and kill cops with glee. This violent and dangerous gang also performs relaxed group Tai Chi exercises at night-time on the city’s quiet rooftops.

Long story short: the criminal activity in Chinatown is escalating and the city’s police department doesn’t have the resources to do anything about it. The police commissioner informs the mayor with the unpleasant news under the most appropriate of circumstances … at a “sweet 16” birthday party for the mayor’s adopted South Asian daughter, Corrine. Also in attendance is J.D. Makay (David Heavener), karate instructor and mentor to the mayor’s young son, Will (Chance Michael Corbitt). For no particular reason — we can only assume for covert reconnaissance — he’s working as a waiter at the event.

People spreading all sorts of havoc.

This is where the confusion begins to take hold. Director Stefan Rudnicki cuts away from the party to the aforementioned Tai Chi gang demonstration, then to footage of the mayor finding a “For Hire” business card in his limo, then to the police commissioner’s office, where the commish tells the mayor he’s pulling all police presence out of Chinatown. Then back to the birthday party, where the mayor’s 10 year-old son is chatting up Makay about helping his dad. While no American martial-arts film is complete without some sort of studio ballad (usually paired with a training montage), LETHAL NINJA flips the script by having Corrine dedicate an out-of-key song to her dad during her birthday party with her step-sister, Rachel (Bambi Swayze) accompanying on piano. Thankfully, Rudnicki breaks up the monotony by cutting away to a prostitute smoking crack and then approaching some police officers. Then we jump back to the awkward ballad. It’s hard to tell whether this mess was the result of the filmmakers making an honest attempt at non-linear storytelling, or the DVD authors putting the scenes in the wrong order. I was so confused. It’s another example of why you shouldn’t smoke weed while making, editing, or watching DTV martial-arts films.

The leader of the gang, the violence, and probably the awful editing is Sonny, played by Kamar De Los Reyes. In the credits he’s billed on a first-name basis only, maybe so he could put this mess behind him in a play for legitimacy. (It almost worked, but it’s tough to hide behind similar credits for EAST L.A. WARRIORS, GHETTO BLASTER, and the Jeff Speakman film, STREET KNIGHT). His primary rival on the streets of Chinatown is Zeke Wild (Chris Ramsey), another gang affiliate. The trash talk between them eventually turns physical, and by that I mean violent, not romantic.

Between a decaying Chinatown, an unhelpful and overwhelmed police force, and an impending re-election, the mayor is in a tough spot. After his marketing strategy of leaving “For Hire” business cards everywhere the mayor looks, Makay sneaks past security and arrives at the mayor’s mansion to make his final sales pitch. For an affordable fee of $1 million, he offers a three-pronged plan of attack. For many reputable ninjas, this would include smoke bombs, shurikens, and multiple stealth kills. In Makay’s own words, his strategy is to “go in,” “spread some havoc,” and “work the snake out of the woodwork.” Whatever that means.

Makay’s special brand of havoc includes stealing Zeke Wild’s car, indiscriminately karate chopping people, blowing cocaine away from people trying to snort lines off the sidewalk, and getting beaten up by groups of women. This unexpected aggression, however futile, has the Chinatown gang on edge and it’s only a matter of time before the “snake” is revealed as Sonny. We come to find that he and Makay trained under the same master in their youth, sparring in Zubaz pants, chasing girls, and playing basketball. I say this not to spoil any “Big Reveal” showdown between the former friends, but to reiterate that the fight skills of Sonny and Makay are equally boring to watch; their master was a bit of a hack.

The climax is a blend of funeral, shoot-out, foot chase, cross-dressing, and a heated art auction showdown. This is probably the best stretch of the film but that isn’t saying much — the fight choreography is ho-hum overall, and it looks like everything was done on the first take. I’ll single out the mayor’s head of security, Saint Elmo (James Hurd), for praise though; his hilarious expressions and line delivery are some of the film’s highlights. Heavener is also good in his unique way: amazingly fluffy mullet, great outfits, and an attempt at a smooth and laid-back demeanor that screams “substitute gym teacher trying to be cool” more than “action hero star.”

Even with all these points working against the film, the worst offender is still the script itself, which includes some of the most inane dialogue I’ve ever heard in a film. You know how the songs of Wesley Willis are entertaining and hilarious because they’re mostly just obscenity-laced streams of absurdist consciousness? LETHAL NINJA is like that, but not as good. Lines like “Names don’t mean much. What you do is what you are, and what you need is action.” David Mamet, eat your heart out. Or how about this winner: “I can do this. I won’t say don’t worry, but I will say that I won’t come back without Will. And I will be back.” Woof.

However, nothing in the film comes close to touching the film’s rousing funeral eulogy scene, which I’ve transcribed here in its entirety if for no other reason than there’s no convincing way to describe it. Would you let your priest/pastor/holy person spout this guilt-ridden, contradictory, nonsense at the funeral of a loved one?

“I did not know [her]. How many of you think you did? How many of you think you had nothing to do with sending her to her end? She had no family. What family she did have are all present and accounted for right here. People who loved her, cared for her, gave her shelter and work. Gave her a reason for living. Did anyone really know her? How could anyone know her better than that person who gave her a reason to die? In the midst of life, it is said we are in death, and unless we see in our loved ones the skull beneath the skin, the soul beneath the sheath. The very moment of their deaths, we know nothing about them. We can only be strangers to them in this life. Accept your guilt then. Your complicity in [her] death, the knowledge that your love, your care, led her to this pass or pass on indeed in the full knowledge that not only did you not know [her], that you will never know anyone again in this life.”

The film’s original title was the snoozy, generic FOR HIRE, and we can thank our Canadian neighbors to the north for releasing this on DVD as LETHAL NINJA. I think most would agree that the superior title would have been “Lethal Ninja For Hire,” even though Heavener isn’t much of a ninja. Then again, this isn’t much of a movie. But if you’re itching for a film featuring horrible dialogue, Patrick Swayze’s sister, and a bunch of people who never made another movie, LETHAL NINJA is a soothing cream with anti-itch properties.

—This content was originally posted at Fist of B-List